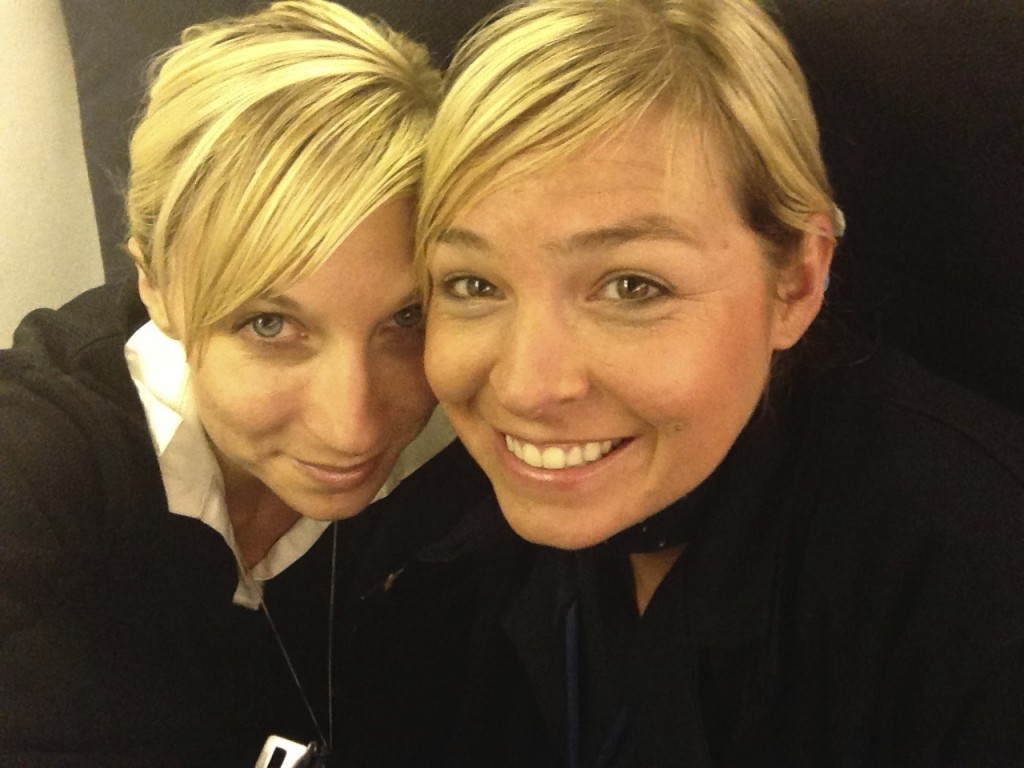 You Must Be My Soulmate

There is a lot that I never predicted about my Flight Attendant Life.  Once, I remember I said that if I was going to work for a different airline, I would only want to work for Southwest or Hawaiian, but I followed that by saying, “Not Hawaiian, because I don’t want to be based in Honolulu.  I like Hawaii, but I wouldn’t want to live there.”  And then, I lived there.  Go figure.  I guess with all the statements, of ‘I-would-never-dos,’ I should start with the part about being a flight attendant.  Yep.  Said I would hate this job, and nope, I don’t (at least on most days).

One thing that I never envisioned was that I would gain a slew of best friends.  This summer, I was babbling to The Fighter Pilot, about “my best friend this, my best friend that…”  In a voice filled with confusion, and laced with skepticism, he responded, “How many best friends do you have?” “What?” I said.  “Is there a limit on the number allowed?”

What’s going on here? Just some fun in Chicago.

I do have a lot of best friends, close friends, and people in my life that continually make a significant impact, many that are my colleagues, and many high school, college, or random travel friends.  Each person is so different, and my relationship with each, unique, so if any one of them were absent from my life, my life would be missing, and we all know how much I hate missing. My airline is unique in that, every month, flight attendants usually fly with the same people on every trip.  And, the flight attendants, if not close friends, at least know each other.  There have been many days that I dread work, but then think that, “Hey, this won’t be so bad.  It’s all of my best friends.”  I know one of the reasons that I like my job so much is because I am close to the people that I have to work with.

There were four of us in Hawaii that became exceptionally close.  Keri, Emily, and I were in the same initial training class, and Dorie is the new addition, although it doesn’t feel like anyone is ‘new.’  Being stuck on an island, with crazy schedules made it so that I only spent time with my airline friends.  They became my family, understanding what most would never be able to about our lives, adventures, and heartbreaks.

Dorie & I in Washington State

Emily moved away from Hawaii in August.  Dorie has always spent two, or three weeks each month in Colorado, where she lives with her family (she’s a commuter).  Keri has responsibilities like laundry, and can’t hangout all of the time.  I’m all over the map, in general.  Thankfully, iPhones have changed flight attendant’s lives all over the world, as iMessage has been part of the glue that keeps us communicating.  It doesn’t matter where any of the four of us are in the world, we keep our silly banter going, day and night.  It’s fairly ridiculous when one of us is out of the chat for even half an hour.  It probably means you’ll have to catch up on over 83 text messages.

The friendship between the four of us is one of the most special gifts in my life.  Even with moving to Florida, it doesn’t really feel that much has changed.  I miss knowing when I will see them, but we will always be close, and because we are flight attendants, with free travel, our goodbyes are just see-you-soons. FaceTiming with Dorie & Keri.  They are in Hawaii getting tattoos.  I’m in Florida, eating dinner.

I’m surprised by how well the four of us compliment each; how different we are, but how perfectly we fit together.  There isn’t jealousy between us, as each one of melds into our own rolls within the friendship.  I can’t explain us.  It’s special.  Like soulmate special.  Emily said once, something to the effect that our airline, with its faults and all, was the best place for her because it is why we met. Emily & I in Los Angeles

My dad has a saying, and he repeats it when I’m frustrated, scared, or uncertain about life events.  He says, “This could be good, this could be bad.  I don’t know yet.”

That is life.  Sometimes life throws, what are perceived to be rejections in our faces.  I know that’s how it felt when I was applying for jobs five years ago, and even when I was rejected for flight attendant jobs.  I felt like I had made the biggest mistake leaving Hawaii.  I second guess myself often.  But, the more time that unfolds, the puzzle falls into place.  It is more a matter of trusting that you will end up where you need to be, and meet the people that you need to meet.  That has been, and is, what I experience. Your wishes will come true.  You will find what you are looking for.

Love your blog! I interview with SWA a few weeks ago. Waiting on that call!!!