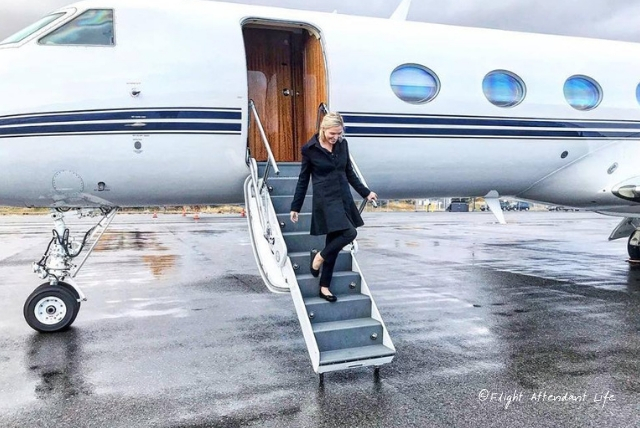 I remember when I was a new hire flight attendant. I was barely twenty-three and giddy about the opportunity to push a cart down the narrow aisle of the long and basic MD-80 aircraft. It was exhilarating singsonging to each row of uninterested passengers, “Would you like to purchase any snacks or beverages?” The beginning of my aviation career was a season of new friends, new experiences, and living in a new city. When I wasn’t onboard the aircraft, working (which was a solid four days a month thanks to being almost last in seniority at my LAX base), I was on a plane traveling for fun. Travel is the motivation for many to become flight attendants. When you work for an airline, the free and discounted travel perks semi-make-up for the low pay. With cheap or free flights to all corners of the world, I made it my mission to go to a new country every month. For almost five years, this was my purpose: Travel. As much, as long, and as often as I could. This made me so happy, but then, that changed.

After being based in Hawaii and transferring to Florida, the ability to change my schedule, so I had time off to travel, stopped. I couldn’t secure days off in a row, and the joy I found in my job and location waned. I wasn’t as happy in this phase of Flight Attendant Life. Work was less of a joy, and there wasn’t much more to learn. It felt a bit mindless, the passengers became a bit annoying. Going to work as a flight attendant is great when you want to be there. It’s an easy job but becomes hard when you grow out of it. It happens when you’ve changed but aren’t ready to make a change yet. I faced an impending evolution and found myself confused over where the job I loved went. I wasn’t exactly sure what to do next. Then, out of what seemed like nowhere, I was to get an unexpected opportunity.

I was offered the chance to work for an International European Airline. To step into this new space, a new company and a different work dynamic meant I had to let go of some positives that I had going for me at my previous company. Going to the next thing wasn’t easy, and over the course of the following months, I would second guess myself often, but taking the chance for something new was the best choice I could have made. Generally, I’ve noticed that going into the unknown and going after something interesting is usually beneficial in the long term.

For the next two years, I adventured and discovered and grew as an International Cabin Crew Member. My colleagues were from all over the world. I learned valuable lessons about cultural differences in the workplace and experienced a glimpse into the way that airlines in Europe roster and schedule crew. At the first airline I worked at, we only flew day trips, but at the second airline, I flew international long-haul flights. These trips could be as long as sixteen to twenty days at times! We worked with 9-13 crew members and flew to places like London, Stockholm, Paris, and Oslo. The first time I went to Norway, I was sitting in the flight deck, on the observer’s seat, of a Boeing 787. The plane was new, the experience new. I got to do something I never thought would be possible in my life: Work for a European airline when I didn’t speak more than one language (Side note: Learn languages. It’s such a blessing and a gift to be able to communicate in multiple languages).

With this airline, I was gone. A lot. And for a while, that was more than ok, but after a while, the constant red-eye flights, low monthly salary, and lack of control over my schedule started to wear on me. I wanted to have more time to write and kitesurf. I hoped to earn more money and work less. That would not happen through working at the airlines. So, entered the idea of corporate aviation. I decided to become a corporate flight attendant. The thing was, I had no comprehension of how challenging that would be or how much self-doubt and the financial burden I would incur. Somehow, with the help of a couple of pilots and experienced corporate flight attendants who really gave me my break, I eventually built an established career.

Becoming a corporate flight attendant has been one of the most worthwhile ventures I have undertaken, and starting this blog. The job has taught me persistence, resilience, faith, poise, built and broke me. It’s not a kind career, but it sure as hell will build character. If it doesn’t, you’ve wasted your time. Although the career won’t always be kind, I’ve met some of the most professional and incredible pilots and have some of my closest girlfriends who are also corporate flight attendants. I believe the skills we develop and the places we choose to go will yield payoffs and rewards in ways that are often not quantifiable. I know I’m better for being a corporate flight attendant.

The ironic part of my corporate aviation career is that I didn’t feel most fulfilled when I was considered the most successful. I felt the most joy in my job when I was challenged by the learning when I was a bit of an underdog. Don’t ever let those moments and the beauty of the process pass you by. For me working for the goal of being a corporate flight attendant is better than the goal itself.

I’ve still met milestones in my corporate flight attendant evolution, and yes, these moments are still magical. Earlier this year, I had the privilege of assisting with the delivery of a new private jet and gaining experience on that aircraft. Being on the plane and helping to set it up took me back to the days when I found a lot of joy as a flight attendant. This particular project was very difficult at times, but the experience is probably one of the most monumental in my private aviation career. I was told I wouldn’t make it in this career. This was one of those moments when I marveled, “I can’t believe this happened.”

I’ve never felt like I’ve made it. I’ve simply felt so grateful that somehow I have Flight Attendant Life as part of my story. It’s been what I’ve known. It sometimes feels like who I am.

If there is one thing that being a flight attendant and the career evolution that I’ve experienced has taught me, it’s that ‘making it’ is a big letdown. The best days are the days when you are really in it. In the challenge and completely engaged in the process. Being a flight attendant over the past year has become a job and a way to pay bills more than anything else. To be honest, I’m not that engaged in Flight Attendant Life now. Admitting that is a bit heartbreaking because I feel like I’ve lost a piece of me. I sometimes wonder, “Is there something wrong with me? It seems like everyone loves this job but me.” The conclusion I keep stumbling into over and over again is that, “No. There isn’t anything wrong. This is simply the natural and inevitable evolution of being a flight attendant.”

It’s worse to NOT allow yourself permission to evolve, move on, let go and grow. A perfect example of a failure to evolve as a flight attendant is the Senior Mamas and Papas, that are so grumpy and lazy that God forbid they have to lift a hand to give you a bottle of water as the passenger. Once, they were that new and giddy newbie flight attendant who couldn’t wait to walk down the aisle pushing the trolley. Don’t let this be you, regardless of your industry, career, or age. Have the courage to reinvent your identity.

I’m not taking any jabs at commercial flight attendants. They have had an impossibly hard year in their industry. Corporate Aviation has been tough, too. I’ve felt it and struggled with it, wondering in moments if I would have money to pay my rent this year. And as angry as I want to be over the career that I had, and I don’t have now, I circle back to the reality that maybe this unfortunate situation offered an opening for me to grow. A way to NOT become a bitter and abrasive flight attendant.

I’ve not always had the healthiest relationship with my career, and the past year offered time for personal reflection regarding the way I equated my value to my income, placed too much importance on an image, and enjoyed the popularity of work calls. The truth is, I could be saying all of this to you now because I’m really not in the same place with my career as I was a year ago. So, it is possible that I’m attempting to justify what feels to be an unsuccessful season in my life. But then that begs the question, “What is success actually?” And have I measured my success too often by external accolades instead of by my internal heartbeat and the murmurs I feel that signal peace, love, kindness, and joy?

I am sad about the flight attendant evolution I’m experiencing, but what keeps me stepping into my unknown is that I refuse to be a grumpy flight attendant who is old and tired and hates people— flying across the ocean, abhorring her job and her life. I’d rather be a little lost and broke than that. I’d even rather be a pilot over a miserable flight attendant. (Haha…I’m kinda kidding. FYI I’ll be writing more on Pilot Life over the next few months).

So, I’m here. Meandering through my wins and losses, trying to make sense of what hasn’t gone my way and hoping to remember all that has fallen into place. I remind myself that life will be more fun and free and financially better again. I hope for open borders and inside cafe sitting. And hugs. How I hope for hugs. I’m not sure where my flight attendant evolution will lead exactly, but I’m hanging on that the next destination will be worth the pain and the wait.