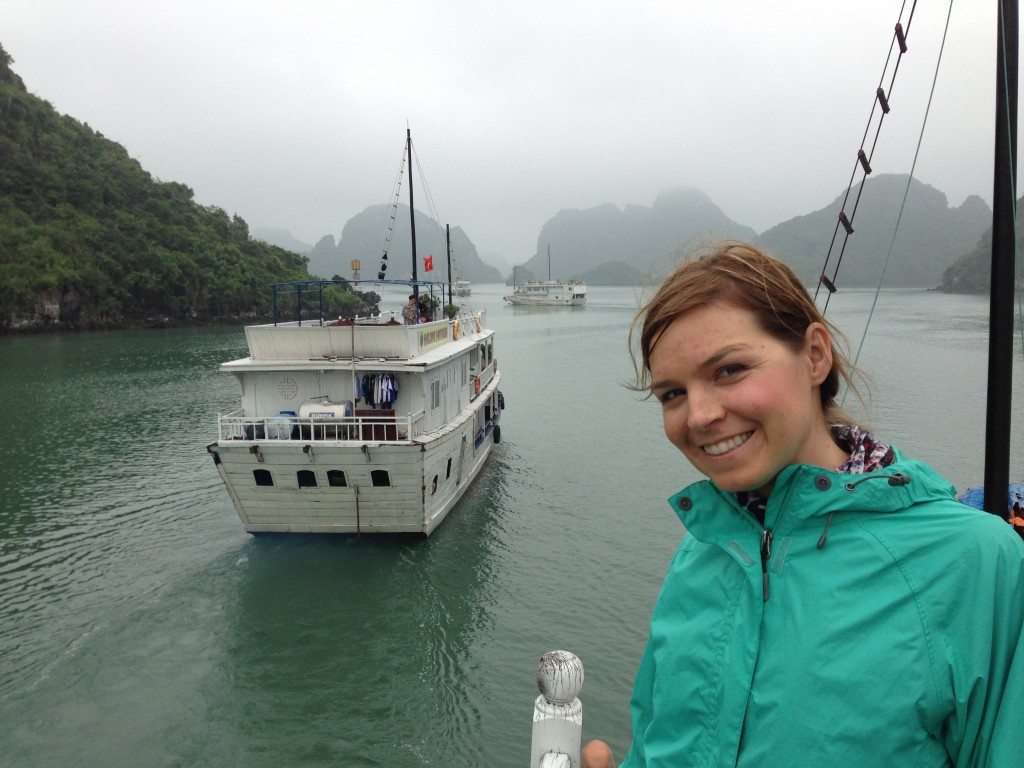 For those of you backpackers that just want the straight facts about a cheap and inexpensive way to travel from Hanoi to Halong Bay, via Cat Ba Island, with the return to Hanoi different from your departure, just skip to the very end of this article  I say this because bloggers sometimes annoy me when I’m trying to find solid travel info, but instead only get anecdotal tid-bits.  If you are here for my ramblings, please read on as it’s in typical Kara style, ridiculous and tangent laden.

Right now, as I sit at a cafe in Waikiki, I am regretting the fact that I spent my moving expense on a 20 day travel through Vietnam & Thailand this past November/December.  Having that money right now would make my transition from address-less to settled, seamless.  Instead, the choices I’ve made have determined that I am going to have to live in a suitcase for a month (not too unique for me), and home will be a hostel for a short time.  Gahhhhdddd?! “Really, Kara!?!?  What were you thinking??” My emotions and excitement trumped logic.  That’s the excited face

Well, I was just thinking that I wanna see the world, and that Halong Bay in Northern Vietnam looked pretty awesome.  I wanted to see the place for myself.

I quickly realized after Dad and I arrived in Vietnam, that I had mis-calculated how the travel would be.  Although a fairly inexpensive destination, the travel process was much more complicated than what my European travels have been.  I didn’t have time to deal with complicated, and my diva-esqueness didn’t really feel like putting up with the hassles.  I tried, but my feeble attempt at purchasing train tickets from Hanoi to Sapa, was quickly thwarted when communication couldn’t even be commenced, and my hunger and exhaustion overwhelmed.  All Dad had to say was, “You just want to go back to the hotel and relax, Sweet-Sweet.  Get something to eat?” This is a very quiet street

When I travel, people who don’t know me think that I am laid-back, but the truth is that I am a big bossy-pants.  When Dad, told me an itinerary, I would quickly trump it, not given an explanation as to why my plan was better, or how it was to work.  This lack of communication was mostly because I really didn’t have a clue if what we were doing or where we were going was a good idea, but I acted like it.  And that Dad of mine is the most laid-back, laughable fellow, so he would just shrug, following along happily, and with exaggerated zest explain, “Isn’t all of the honking horns and traffic GREAT?!?!” I decided that we would go to Cat Ba Island, the largest island in Halong Bay.  Many people who visit Halong Bay spend a night or two on a junk boat, an activity which I had wanted to do, but the prices for that excursion was more than I was willing to pay.  From my sketchy research, I had figured that a bus could take Dad and I from the noisy streets of Hanoi to Haiphong, and then by boat, we could travel to Cat Ba Island.  The price tag was the equivalent of going to the movies, around $11, and I could star in the real live flick; double-bonus! It was a large bus, not full, but did consist of the backpacker type, and I laughed when I saw that the bus slowed to pick-up a DSL package from someone standing by the side of the road.  A new kind of efficiency; transportation of passengers and packages.  After a couple of hours, our little group was dropped off at a station in Haiphong, where we stood there, me not really knowing exactly what we were supposed to do.  The others acted like they knew, but they were faking it, I’m sure.  The whole goal of a backpacker tourist, is to look like a cool backpacker, un-tourist, which means to chill and maybe smoke a cigarette well you wait, just to add to the, “I’m-so-relaxed” image. 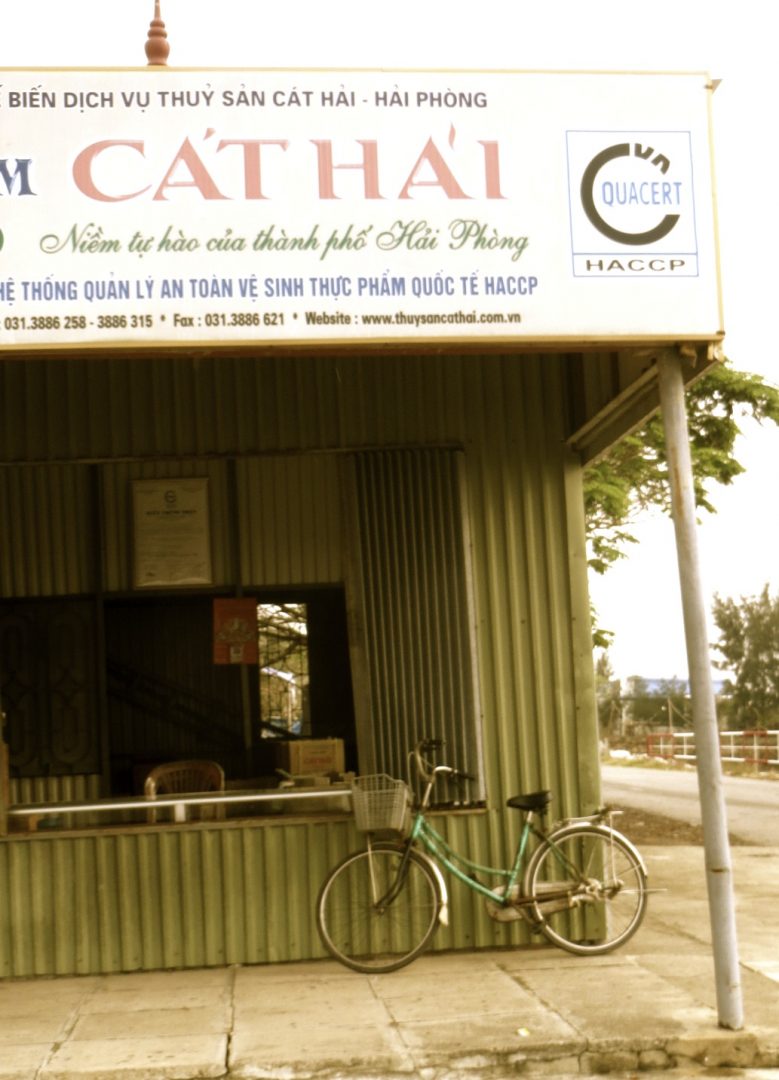 Anyway, after not too much longer, a mini-bus/van pulled up to the curb, and backpackers grabbed their backpacks, and I pulled my suitcase, the only suitcased individual besides my father of the group.  I like being different.  Actually, it’s more that I HATE traveling in a backpack.  Croatia taught me no more.  Slow little me, climbed into the van last, and their were no seats, except for a center aisle fold down seat that was broken into an ultra-reclined position, and every bump that we bounced over, I bounced that much higher.  The bounces made me laugh, and as I watched my dad look around at the scene, all I could do was admire that his 50-year-old self seemed to be enjoying where his daughter had dragged him to. The bus pulled up to gravel, and an industrial style looking dock, with a jet-type boat that look very old and was very rust covered.  The life jackets looked like they wouldn’t even be able to help a fish float, and I thought that this must be the type of boats that you hear of foreigners drowning on.  Cheers to another adventure! And we made it to Cat Ba Town, and enjoyed a couple of days there, renting a moped, and going to the same restaurant over and over again, and me determining that I do not like Vietnamese Coffee. The Best and Cheapest Way To See Halong Bay and Cat Ba Island.

Buy:  Bus/Boat Combo ticket from Luong Yen bus station.  It’s the Hoang Long Bus and Ferry company, leaving from Hanoi with the transfer to the ferry happening in Haiphong.  Please look at this Tripadvisor forum (it’s a little old, but still fairly accurate).

Total travel time:  Totally worth it.  (I don’t really remember because I was distractedly happy to be going somewhere, but factor in about 5hrs).  Take a look at this site, which recommends the bus combo ticket.  Return is l

For the return:  At the hotel where you stay on Cat Ba Island, book a return journey that takes you on a junk boat from the other side of the Island.  This way, you can see the more photographed, beautiful parts of the bay.  This ticket will cost you between $15USD-$20USD.  I thought it was a long bus ride back to Hanoi, but it was easy, convenient, and the junk boat ride was serene, which you don’t get much serenity is loud Hanoi.

Hotels on Cat Ba Island:  The hotel room that we settled in at was a pricey $10 a night…budget traveler’s dream.  It was the off-season, and the same, ocean-view room goes for $60/night in high season.

Scooter rentals are about $5 a day.  Food is a bit more expensive than other places in Vietnam.

Hey,great tips. I’m backpacking through Vietnam in a couple weeks and been searching all over the internet for a simple cheap way of doing Cat Ba and Halong Bay, this is perfect. Was the bus back to Hanoi included in the junk return price? Also which company did you use for this?
Cheers
Aaron

Hi. This is great. I’m planning on going to Halong Bay with my family and have been looking for a cheaper way to do this.
What was the name of the return company you used and the hotel you stayed at in Cat Ba?
Also, how was traveling on Cat Ba itself?
Thanks!

hey kara, i’m either stupid or just confused, you say at first its 27$ for the bus/ferry from hanoi to Cat bah with the ferry being at Haiphong…so whats the bit about Return to Hanoi for 15/20$? is that because you didnt use the return part of your original ticket? anyways..thanks for the info!