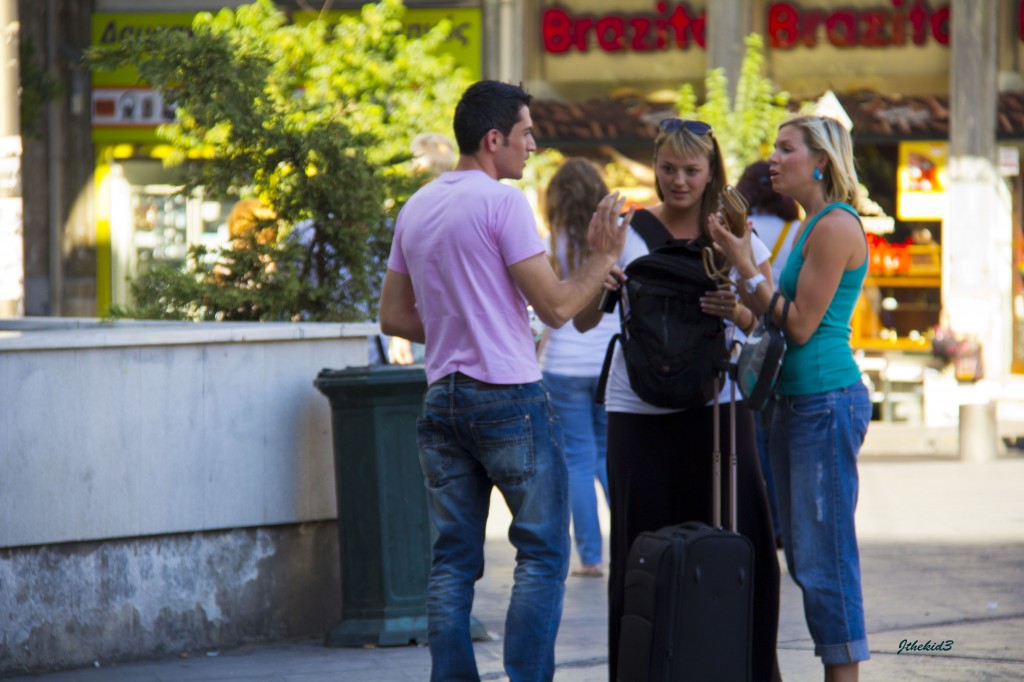 Fairytales are those stories that seem nice, but don’t actually happen.  Only at Disneyland. Only in the movies.  Reality states that it’s just unlikely that all turns out right in the end.

If the definition of a fairytale is closing with a “Happily Ever After,” I experienced one such happy ending during the European Adventure of September, thanks to an honest taxi driver, his wife, and the wonderful world of Facebook.

This is the unlikely story of how my computer was left, lost, found, and then returned.

We walked along the sidewalk, making our way to the taxi queue, the long line of cabs and drivers waiting to whisk away the next tourist.  As I looked down the row of cabs, I thought back to a time I had flown into Ft. Lauderdale.  I had a stereotypical taxi driver experience; he was beyond rude, and I was cheated.  In that situation, I had an advantage in that I spoke the language.  Now, I found myself in Athens, and not Athens, Georgia.  I didn’t even know how to say hello in Greek.  This could be interesting.  I sent up a silent and quick prayer, “God, just please make the driver honest.”

It was dusk, and the colors of the Mediterranean sky, were hues of orange and red, as darkness began to engulf the landscape.  Throwing our bags in the trunk of the taxi, Emily and I showed the young, dark-haired cab driver the address of our hotel.  He entered the destination into the GPS, which would take us 25km towards the sea.

Five minutes into the drive, I began a hopelessly sad attempt to chat with the driver.  I wanted to know his name.  I wanted to know about Greece.  I wanted to learn Greek words.  Emily pulled out our guide-book and began to pronounce the listed vocabulary.  I rattled off questions in quick succession, speaking much to fast for even a native English speaker to understand.  The driver, Aris, laughed, shook his head, and repeated more than once that I must slowdown.

The GPS was taking us nowhere near a big and sprawling resort.  Finally, Aris pulled up to an address, that was more of a dark street, than a hotel with an ocean view.  What should have been a thirty minute drive turned into an hour and a half, as we finally pulled up to the right address. Wrong turns and the unfamiliar area had left Aris frustrated and us tiredly frazzled.  We smiled, paid the fare, and politely said thank you, not asking for our change.  The whole situation cost him more considering he could have ferried another handful of travelers around Athens.

Dropping our bags on the floor, Emily and I plopped down, our queen sized beds engulfing us.  We were exhausted.  Commenting on how long that took, I followed up with, “at least he was very nice and honest.” I stood up, and reached for something in my bag, and questioned, “Hey, where’s my computer?”

At the airport I had placed my bags in the trunk of the taxi.  In the chaos of arriving at the hotel, the taxi driver pulled our bags out of the trunk.  My computer case, containing the computer, an important work ID badge, bible, and phone charger had been inadvertently left in the taxi.

It seemed to be a complete impossibility that my items would be found.  There were thousands and thousands of taxis in Athens.  I didn’t know the cab company.  I didn’t have a license plate number.  I knew the cab was yellow and the driver’s name.  That was the extent of it, and that really wouldn’t get me very far.  And besides that, I was told that Greek taxi driver’s are the most dishonest of all taxi drivers.

I realized that I had a choice to make.  I had lost the computer. This could stress me out, or I could let it go.  The items were easily replaceable, just a minor inconvenience.  Emily and I were safe. I still had money, credit cards, and my passport.  It would be fine if the computer case and contents never returned.  But I hoped and wanted to believe that it would.

That following evening, after returning from dinner, I checked my email and Facebook.  I was overwhelmed by what I saw.  The taxi driver’s wife was able to login to my Facebook, not to encroach on my privacy, but in an attempt to find me.  She was asking all of my friends if they knew how to find me, which led to the cascading effect of multiple emails telling me that someone had my laptop and was looking for me.

I had been told that it was impossible for my computer to be found.  There was no way it was coming back.  When I told Emily that it was found, she said, “Of course.  It’s you.”  For some reason, I have this unexplainable luck at meeting the most incredible people.  And, I also believe Someone is looking out for me.

I was not only overwhelmed by the goodness and honesty of Aris and his wife Eleni, but by my friends who even offered to set up a Paypal account so that my computer could be shipped back to the states.  Even friends that I had only known for the span of three days from other travel stints and that I hadn’t seen in years, were involved in the Facebook reconnection.

Aris met us at a metro station the next day.  Come to find out, he had actually turned his taxi around, trying to return the computer the night that it was left, but hotel security would not allow him back through the gates.  He absolutely refused to accept any monetary form of thank you, shaking his hands and backing away from me when I tried to hand him a few Euros for his trouble.

As I mentioned earlier, multiple people, on multiple occasions said that Greek taxi drivers are dishonest and shady.  This is an unfair, blanket statement.  I was harboring my own prejudices, that have now been put in their place.  People are not good or bad or honest or trustworthy based on their professions or course of work.  They live a certain way because they make a choice.  Of course, there could have been a different, and more typical outcome to this story, and I am so blessed that I experienced a happy ending.  I  don’t feel like I deserve it and that there’s not much I can do in return.  And maybe I will never be able to repay Aris and Eleni directly, but I can live and continue to live my life, treating people with kindness and helping people without expecting something in return.

So, if you are going to Athens, and need the best taxi driver in the whole city, I’ll let you know where you can find him.

The following images are candid photos that my traveling buddy Jimmy took of the actual event of the computer being returned.  Hence, the funny facial expressions.

Trying to give Aris something for his trouble

Telling us he couldn’t take anything!

[…] interested in insurance that will cover those easily misplaced laptops, baptized cameras, and stolen iPads (keep an eye out for the TSA), I decided to find out if […]

[…] check, and re-check that I have my badge when I am traveling.  I lost my badge in Greece and that little lanyard is my ticket around the world, and back again.  But, even with the economy […]

[…] have been found speechless from the goodness of people, shocked at smiles from a humanity that has every right to live in despair, and been disgusted and […]

[…]  Usually, the first thing you have to do when arriving in a new country, is catch a bus, train, or taxi, and it helps to have small bills.  I like leaving Europe with Euros for two reasons:  it’s […]