well, we’re lucky to be in the same country by the end of the day.

Most of mom and my trip consisted of us getting very lost, being approached by very nice Dutch people who would point us in the right direction and then getting lost again.  To our benefit, many locals did admit that their city was not easily navigable.   To them I say, “As long as we don’t end up somewhere in Belgium or Germany, we are ok!”

First thing we did (after getting lost, of course) was find our hostel, check in, and get our bearings. Our hostel, called Ecomama, was very Euro/Dutch hip with minimalist design elements, lots of hanging plants, a check-in counter made entirely of books, a full kitchen, a long dining table (for socializing, drinking and games) and an indoor teepee.  Yes, they had a teepee set up inside with pillows, lounge chairs and low lighting inside. The front desk gave us a quick introduction to Amsterdam on the map, and told us about a free tour of the city. We took the free walking tour that afternoon (New Europe does two a day!), which was two and a half hours.  We ventured all around the main sites of the Dam Square, the Red Light District, and the surrounding areas.  Our tour guide, Geert, was very funny and entertaining and knowledgeable about the city, it’s history, and its politics.  Did you know that the Red Light District began with the Catholic priesthood and is actually densely populated by families, the elderly, and all other types of people?  Or that the city was named after the biggest canal, The Amstel and it’s dam (Amstel+Dam)? 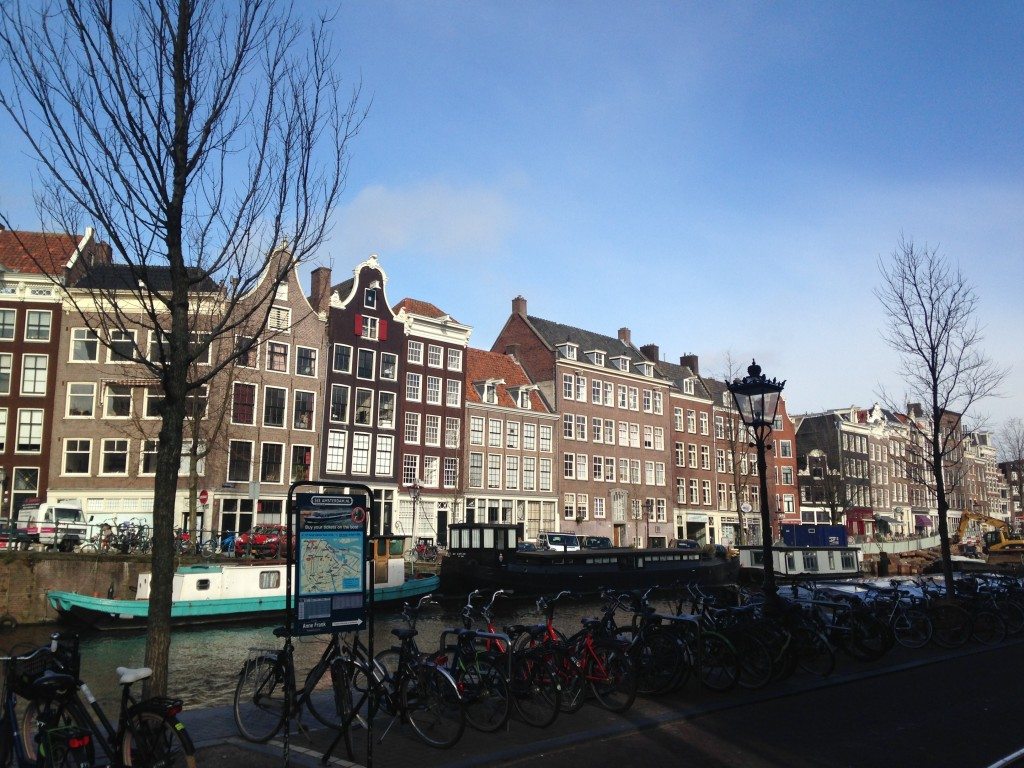 Geert showed us the Royal Palace, some very interesting buildings (many buildings are crooked due to essentially being built on mud), the Homomonument (official moniker; a monument constructed to commemorate homosexuals who have been subject to persecution throughout history), The Anne Frank House and many other sites.  We loved our tour with New Europe and Geert so much, that we booked a Red Light District tour for that evening, which we promptly missed due to getting lost very close to area that the tour was to begin. But not to worry! They let us hop on the next night.

After missing the tour, but getting in some valuable circle-walking and exploration time in, we ate some pizza, grabbed some fresh waffles (chocolate-covered with a huge dollop of whipped cream and strawberries of course), found our way back to the hostel and rapidly passed out. By the next day, we were sure we must have walked around the entire city.  We were confident that we could now navigate our surroundings. But, alas! Amsterdam is big!  We began the day by borrowing some museum passes for the day from our hostel and having breakfast at the little cafe in front.  We had lattes and some wonderful glorious granola with fruit and yogurt.  (A quick note about the food: I have always loved food in Europe. Ingredients are very simple, fresh and unprocessed creating a very different type of cuisine than we have grown accustomed to in America. The Netherlands is no different with farm fresh meats, cheeses and produce wherever you go.) We rented some bikes and made it to The Anne Frank House before the lines could get too terribly long.  The Anne Frank House and Museum is a quiet place of remembrance and reflection.  It’s an eerie place where one can only begin to imagine the horrors that ethnic minorities, particularly the Jewish people, had to face; and not even that long ago.  As with many World War II historical sites, The Anne Frank House reminds us of the enormity and great tragedy of the Holocaust.  We learned more about what happened, and, most importably, how?  How could this happen?  The Anne Frank House explores these questions, but on a very personal level as we learn about the daily life of a German Jewish teenager, forced into hiding in the Secret Annex. 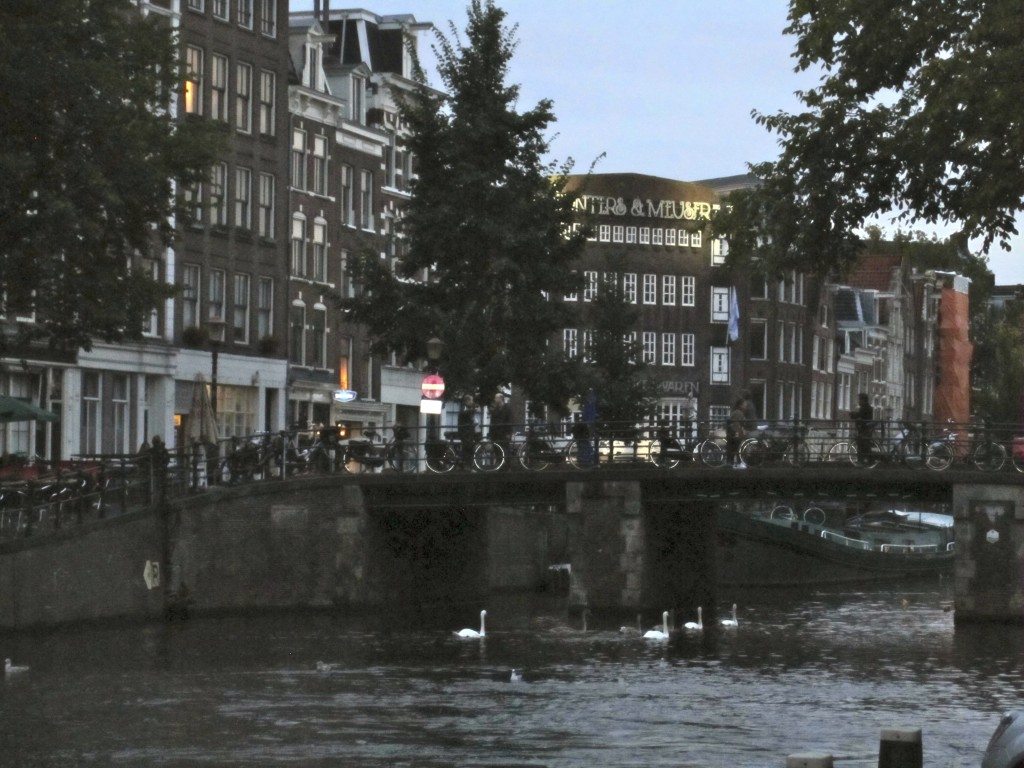 The museum lets out into a room with a short video of modern people’s reactions. We are reminded that Anne’s was only one voice out of the masses, that her story is only slightly unique from many others, and that it is now our responsibility to carry out Anne’s hopes and wishes for a better world.

We next visited the Van Gogh museum. This was very special to me, as I was an Art History minor in college.  You can look at all the slides, photos and copied images you want, but there’s nothing like seeing the original versions of the pieces you studied so diligently in school.  The most well-known of Van Gogh’s paintings at this museum are probably The Potato Eaters, The Yellow House, and of course his eponymous Sunflowers.  My favorite of his works on display at the museum is Bedroom in Arles. The feeling of helplessness with the child-height perspective seems to lend itself to the comfort and insulation one might feel in the throes of mental instability upon retiring to one’s own space.  The lines, colors, and shapes in the piece are very characteristic of Van Gogh and capture his unique style as a modern artist.  After Van Gogh, we went thrifting (there are tons of thrift stores in Amsterdam with fur coats and hats, among other vintage treasures), took a tour of the Red Light District (They have a condom museum as well as a Prostitution Information Center!), had more delicious pizza, and went to the supermarket just before close to grab some Stroopwafel, a very popular cookie in the Netherlands, and lots of cheese to take home with us the following morning.

Wow, what a jam-packed two days!  There were definitely many things we missed.  I suppose we will have to go back!

If you like food, Van Gogh, and cool things like old buildings and canals, you should probably check out Amsterdam.  Really, though, you should just go, even if you only have two days and no sense of direction whatever. 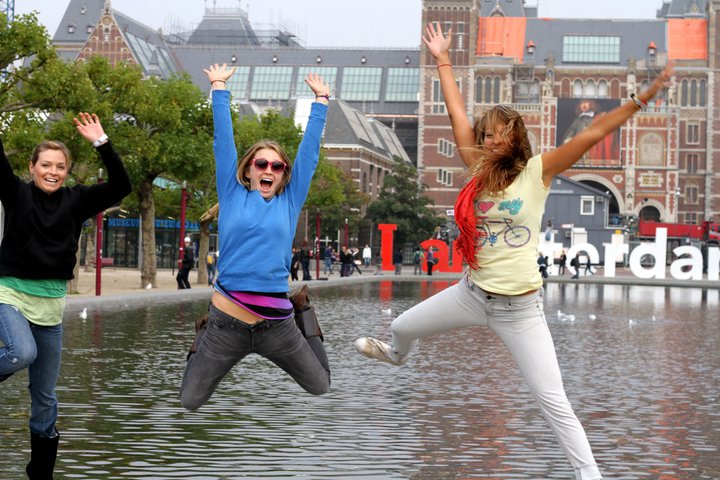