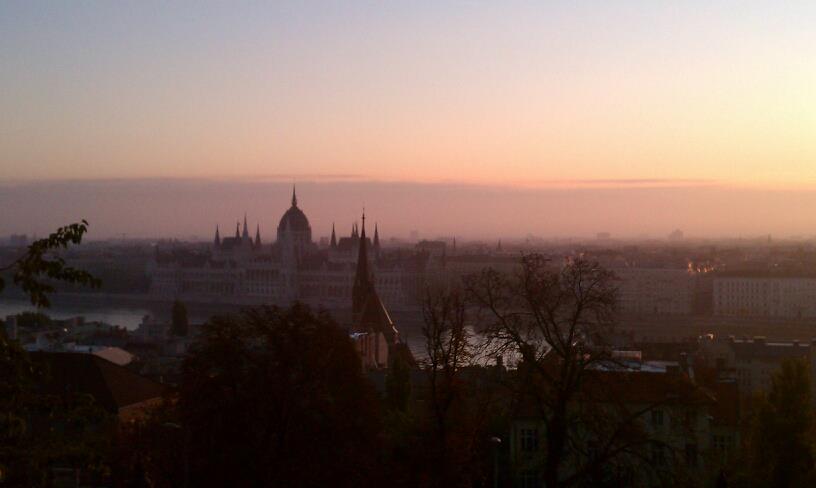 The Room Of The Upside-Down: An Interesting Introduction To Budapest Ruin Pubs

You realize just how small the world really is when you fly over oceans, cross continents, and jump on trains, chugging through countries, only to meet someone who lives down the street and frequents your favorite coffee shop.

Just to illustrate my point:

One evening, while in Barcelona, my friend Pep and I found a cafe and enjoyed a cappuccino whilst passing my small notebook back and forth as Pep attempted to teach me words and phrases in Catalan, the co-official language of the area.

Noticing two friends that were waiting for a table, I motioned to the pair, and began to tell them that they could take the table where Pep and I were seated.  I abruptly stopped, mid-explanation, looked at Pep, and said, “Will you tell them, in Spanish, that they can sit here?”  The young guy responded, “I speak English. I’m from San Francisco.”

Right. Of course you are.

So, back to the topic of the day.

Budapest, one of my favorite stops during The September 2011 Escapades In Europe, just happened to lend my trio, the introduction to another traveling three, two of which, claimed Southern California as home, one of which, lives less than a mile from my abode.  No joke.  (One of the reasons that I travel is so that I can have friends in Los Angeles. Kind of a joke).

Meeting the three on a walking tour, we combined our trios, and finally, I would not be the only girl, a welcomed change.  Over the next few days, we visited The House of Terror, never to be paired without a post beer garden chill session (it’s intense), relaxed at Szechenyi Baths, and experienced the odd scene of a Budapest ‘ruin pub’.

Ruin pubs are part of Budapest’s lively nightlife.  These pubs are essentially bars located in empty houses, creating variety and a unique experience for the partygoers.

Our “Trio x 2” went to Instant Club, a bar that covers three floors, had varied size rooms, one that resembled a kitchen, and included a small basement that housed the DJ spinning on his Apple computer.

The oddness of the entire place was apparent upon entering the club, as the “decorations” included a parade of about twenty-five stuffed bunnies, suspended in the air, looking as though Santa had lost his reindeer and hired the bunny farm to deliver Christmas presents.  A large and creepy stuffed owl was attached to one wall of the main room, and the banister that separated the walkway above looked like something a gardener would use for tomato plants.

Clearly, the people who created this party house were on way too many drugs.

Walking through the club, people mingled in the rooms that were scattered throughout the large building.  In exploring, a few of us walked into a room, which we named, “The Room of The Upside-down.”  It looked as if the drug induced “designer” wanted to make a statement, that “gravity can’t touch this”, by attaching an ironing board and other props to the ceiling.  All of the artwork on the walls was also flipped to follow the room’s theme.

Instant didn’t get good reviews, based on prices and services, but we had fun.  There are other popular ruin pubs in Budapest.  Take a look at a list of them here.

Interesting entry, didn’t know about that kind of pubs there! Una gran abraçada! 😉