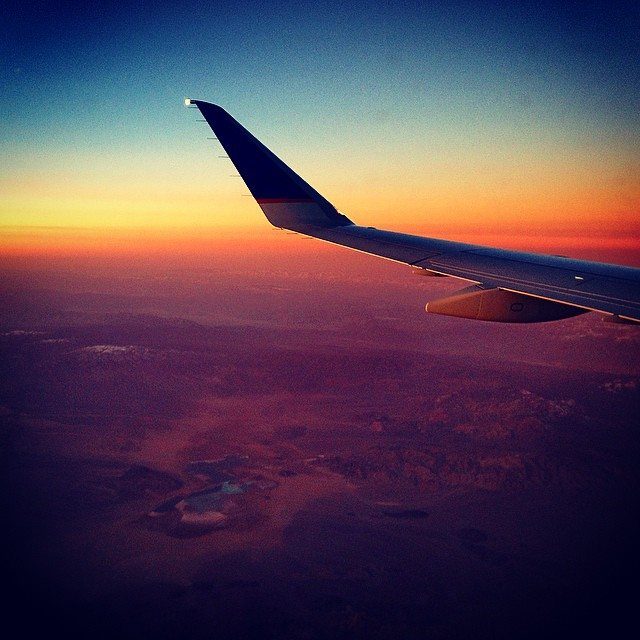 BBQ, Redeyes and Getting Weird in Austin, Texas

My weekend was a little weird.

Friday I spent the day in Edmonton, Alberta, curled up with cocoa and my crew for our 30-hour layover. By Saturday I was back in Seattle, but only for the day. Sunday morning I was on the move again, this time to San Francisco, in order to work a redeye flight down to Austin, Texas.

Our flight took off around midnight, and the next four hours were spent monitoring our sleeping passengers and chatting with my crew in the back galley. Marie, a spunky red-haired Irish girl who had made the trip to Austin dozens of times, told me of a land of drippingly sweet barbecue sauce, frosty mugs of Lone Star beer and legends of a bar that served doughnuts. By the time we landed, I was ready for a hot day of sauntering around Sixth Street.

Except that it was grey and raining. Oh, Austin, you just had to be unpredictable.

We decided to nap and wait for the rain to stop. My hotel room was over a dozen floors up, and I stared out at the city, awash in muted colors. I watched planes descending towards Austin-Bergstrom Airport, coming in from all over the country, bringing music aficionados and bands for this years SXSW Music Festival, or South By, as the locals call it. Five hours later the crew reunited and undaunted by the persistent rain, we decided to get our Texas on.

Iron Works Barbecue was mere blocks away, housed in an unassuming red building not unlike that of a barn. Upon entry we were greeted with sticky hickory smoke, tinny country music and red checkered table cloths. The menu offered brisket, ribs and about a dozen different types of pig products. We jumped in line and ordered one of pretty much everything. Marie, an old pro here, yelled for us to order Sweet Tea. Thank god we did.

Half an hour later we were leaning back in our chairs, chewing on toothpicks and patting our full stomachs. The rain was coming in droves now, but we felt no hurry to get anywhere. A wood stove was three feet away from me and I felt stuffed.

Eventually we braved the rain once again, this time for a sweet treat. Gourdough’s Public House is right off of Sixth Street, with its famous food truck parked in the front. We headed to the back of a dimly lit bar and ordered drinks and looked over the menu. Doughnuts with bacon on them. Doughnuts with fried chicken. Burger doughnuts. Yes.

This is about to happen. #doughnuts #fatkid #bar #austin #texas #flightattendantproblems

The afternoon cleared up considerably and by early evening, we decided to meander. Sixth Street was just coming alive, bulbs flickering on, the reflection bouncing off puddles in the street. Music drifted out of the restaurants and pubs and made a complex melody that floated with us as we walked. Inside an almost empty dive bar, a man jumped on a mechanical bull, one hand holding a bottle of Lone Star. With he whoop he was flung off, laughing.

Chupacabra Cantina was up next. A red-lit taco and tequila joint, this is Austin Tex-Mex at its finest. We grabbed an assortment of tacos stuffed with pineapple sauce, fish, barbecued pork and yep, fried chicken. This is Texas, after all. By the time we reached our hotel we were properly stuffed and ready for an early lights out. As I closed my eyes I looked out over a city that seemed to be bursting with life.

Austin, you are one weird city.